Stephen has always called me a bird brain.  I can only laugh and acknowledge that he’s correct; I am just a little bit obsessed with birds.  To me, they are the most marvelous of God’s creatures.  There is so much to be learned from birds, and the Lord often uses them to instruct me, as you can read here in a previous post.  Working in my field journal, sketching from nature, birds are often a subject.  I like to store up these sketches and notes to further develop back in the studio, at a more leisurely pace.  Observing birds in their natural setting has been very instructive.  I hope the observations considered here will be a blessing to you, as they were to me when the Lord brought them to my remembrance at a time I needed them. 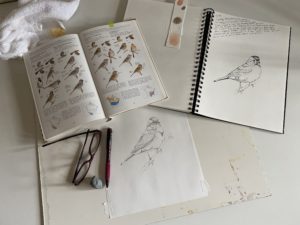 Field journal sketches often become the basis for art projects once back home in my cozy studio.

A Prayer of the afflicted, when he is overwhelmed, and poureth out his complaint before the Lord.

The heading of psalm 102 is especially precious as I read this morning. Pour OUT the complaint.  Surely it needs to come out lest it cause any root of bitterness.  Does not my Lord know it is IN anyway?  Why then do I try to hide it from myself, tucked away in the dim recesses of my quivering heart?  Pour it out — pour it out before the Lord!

There follows a list of complaints, but mine, the one which the Lord used to reveal my heart to myself, is found in verse 7.

Have you ever felt lonely?  If you have, then you know that there is a vast difference between aloneness and loneliness.  I don’t at all mind aloneness; in fact, I rather enjoy it. But loneliness?  No, certainly not.  This scene surely describes a deep loneliness as David’s very precise wording shows me.  This one sentence fills my whole imagination with the plight of this timid, watching sparrow. 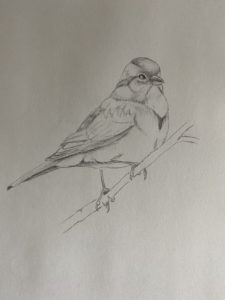 The order of the words is important; it is extremely meaningful that David does not say “alone as a sparrow.”  That would imply that the sparrow is intended to be alone, something altogether different than what the psalmist actually sets forth.

“As a sparrow alone” greatly accentuates an undesired aloneness which has imperceptibly slipped into deep loneliness.  This wording completely changes the tone, if one knows about the social life of a sparrow.  Sparrows, gregarious and congenial, are not fashioned by their Maker to be alone; they are not solitary birds, as the eagle, or egret.  They are seen in cheery, chattery mixed flocks of sparrows and other small songbirds.  As a sparrow alone — the sparrow alone, without companion, friend, or company, is indeed, a most unhappy little bird.

“Upon the house top.”  This poor, lonely creature is not only by himself, but is also in a dreadfully uncomfortable situation because he’s feeling compromised, vulnerable, out there for all to view, exposed in the wide sweeping spaces of the Eastern house top.  Threatened in his lack of physical comfort and protection.  Here, unlike the crow or owl, the sparrow is quite out of his element in another way.  If he were to be alone, it would not be on an unsheltered, open housetop.  Rather, he would be skirting around the edges of a decumbent thorn shrub, the protective tangle of a bramble vine, or the coziness of low bushy trees.

But God sees even this poor little fellow.  “For His eye is on the sparrow, and I know He watches me,” as the popular hymn reminds me.  Or, as the scripture verse says in Luke 12:6, “Are not five sparrows sold for two farthings, and not one of them is forgotten before God?”  Not one is forgotten, God sees them all.

And God sees me as my aloneness morphs into the ache of loneliness.  As I begin to feel uncomfortable in my current situation, as the winds of life sweep through and leave me feeling unprotected, I am not forgotten before the Lord.  Soon enough, like a rushing tidal shift, the loneliness ebbs out, and the Lord’s presence fills the empty spaces. 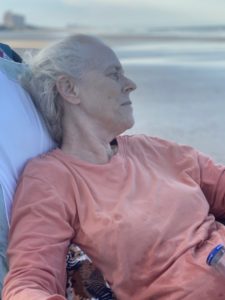 Gazing eastward across the waves, toward the western shore of Sierra Leone, waiting for the tide to shift.

David — the great giant slayer; David — warrior and mighty man of valor; this same David was also the sweet psalmist of Israel, the harpist with hand so tender that he could soothe the maniacal instabilities of king Saul.  David had learned to treasure up to himself the lessons written by God across Israel’s bucolic wilderness.  Reading from this “ lesson book”, the wild, untamed countryside, David received tutelage in the difficulties, troubles, and hardships of his life.  These lessons instruct me too, as I sometimes confront the giant of loneliness.

email
Posted in Meditations from the Morning Watch