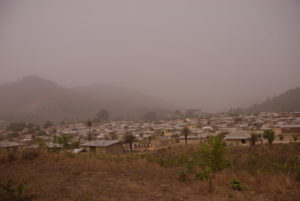 Harmattan dust choking the air looking out over Baomahun from our hilltop mission station. Two more ranges of hills visible when the air is clear.

It was the beginning of April and it was HOT!  The dry season is brutal, sucking all the life out of the landscape as the harmattan winds blow sand and endless dust from the Sahara, bringing with it soaring daytime temperatures, cold nights, and plummeting humidity. 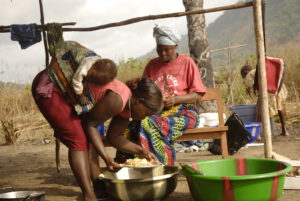 My ladies working during the January Bible Seminar. Mamauguay with baby Adama, Elisabeth, and in back, Margaret washes laundry.

We had just finished three sessions of intensive one-week Bible Seminars, spread out over the months of January, February, and March.  We imported, housed, fed, and taught these groups of students from outlying areas because they want Bible training but, due to distance, are unable to attend the regular Institute classes.  My job was to facilitate the hospitality, hiring and managing ladies from my Bible study group to cook, clean, and do laundry for the students; ten to twelve per session.  This made for a big work load.  It was a hectic, physically wearying three months.  But it was also very spiritually exhilarating!  The seminars concluded just as we headed into the worst of the dry season.

I kept reminding myself that I only had to make it till May when the weather breaks and the rains begin.  Daily I soaked my feet to help with what I call “harmattan heels;” dry, deeply cracked,  and bleeding heels and toes which make walking just a little painful.  I was also struggling with eating because I was just so drained that food was not appealing.  I had lost weight and was physically depleted.  I told Stephen I’d stay behind as he walked the dogs down to the river to give them a cooling swim.  It would be nice to be in the cooler river valley with its deep shade, watching the troupe of monkeys as they chatter and scold the dogs’ boisterous enjoyment of the water.  But the walk through the bush, then down the steep hill I would only have to climb again to come home, it all sounded like way too much energy expenditure when Stephen left. 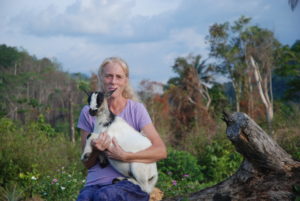 Daisy, my smallest goat whom I hand fed for a few months. Behind me is the river valley, the taller hills being on the other side of the river, the steep descent just past the trees behind me.

I was aimlessly poking about with a few household chores when the goats ran past the open front door.  “Beastly creatures,” I muttered to myself.  “You have all of this big field in the back and now you decide to run off down the driveway.”  With my hurting feet, I went out, grabbed my stick, and drove them back to their evening feeding place next to their pen, a job which the dogs would normally do.

Then again — there go the goats, sailing down the driveway!  What was this all about?  Tired and frustrated, I rounded them up again.

With the goats back where they belong, I went and collected laundry off the line.  I dumped the armload on the bed, and proceeded to fold and put it away.  With several of Stephen’s shirts in my hand, I went to the shelves next to the window in our bedroom.  Glancing out the window, I dropped the shirts as my heart leapt to my throat and my blood ran cold.  Outside the window, with his back to where I was standing, a man crouched, watching the corner of the house from which I had just collected laundry off the line!  He had been standing right in that spot where I would have been less than 10 feet from him!  My mind swirled.  My heart pounded in my throat.  What do I do?  My husband is gone.  My dogs are gone!  It’s just me and three crazy goats!  What do I do?  I swallowed hard, and thought it through.  Then, I was resolved what I would do.

I walked to the front door, which was open, as it always is during the day.  Boldly, just as if I knew what I were doing, I walked outside, and went to the same corner where I had earlier collected laundry.  By this time, the man had crept right up to that corner but I feigned ignorance of his presence.  Not three feet from this intruder, I abruptly turned and, looking him straight in the eyes, I said, “What are you doing?” in the most authoritative voice I could muster.  The look on his face was absolutely priceless; I wish I had been able to take a photo.  His eyes got huge as his jaw literally dropped open, stunned that a woman would challenge a man in such a bold manner.  Time stood still for a few seconds.  Then — he turned and took off running for the bush, with me, barefooted and in a long skirt, in hot pursuit!  We must have been a sight.  He dove into the bush and I dove in right behind.  But soon enough the tangle of undergrowth was too tight for me with my full skirt catching on thorny vines; I could pursue no further.  Probably just as well. 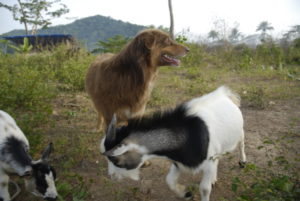 Mercy, on duty keeping my beastly goats in line!

Just another day for the missionary wife living in the African bush.

After Stephen was finished heartily laughing at my story, he pulled himself together and got serious.  He hollered down to the caretaker house for Joseph to come up.  They went and inspected the place where I had chased the would-be thief, unable to discern which way he had taken on the small trail after I lost him in the tangled brush.  Then Joseph looked along our side boundary and found the man’s flip-flops and a shirt which had been left next to a depression in the undergrowth where he had been laying, obviously having watched me for quite some time.  That gave me a bit of a chill.

Piecing things together, I realized that this intruder’s presence is what had spooked my goats.  They had never just randomly bolted down the driveway before and the spot where this man had lain watching me, was near their evening feeding place.  Goats are all about routine and this change startled them.  I was too exhausted to pick up their cues and recognize that they actually had a reason for their beastly behavior.

Much later, when back in the States, and recounting this story to our daughter, she said, “Mom, I just have one question for you.  Whatever did you think you were going to do, had you been able to catch him?”  Perplexed, I had to think about that for a minute, answering, “You know, that’s a good question.  I don’t know.  But, I still wish I had!”