Prelude:  It was the year 2000; the very air was tense as Sierra Leone headed into its final year of a bloody and gruesome 11-year civil war in which an estimated 50,000 people died.  This in a country with a population of less than 6 million people.  Scarce would anyone have given much regard to the birth of a girl in a remote mining village in the geographic center of what the United Nations had termed at that time as the least livable country on the planet.  And scarce would anyone have noticed that her mother died in child birth; Sierra Leone still has the highest maternal and infant mortality rates in the world.  Who would have noticed that a young father was left to raise his newborn daughter?  With a life expectancy rate of a meager 38 years at that time, would anyone have taken any thought of this father dying and leaving his daughter, then a toddler, to live under the shameful status of orphan in a country that can barely feed itself?

And in the year 2000, could I have foreseen that this little orphan and I were set on a trajectory in which our lives would collide, for better and for worse, when she was edging toward 11 years old?  No, I never would have dreamed it nor could she have imagined it.  But in God’s marvelous ways, that’s just what happened.

I noticed her immediately.  There was something different about her.  She was noticeably dirty.    Her eyes were wild, maybe fearful, but certainly timid and uncertain.  For some reason she instantly captured my heart in a way that the other children didn’t.  Skirting around the back of the group it seemed she wasn’t entirely comfortable. 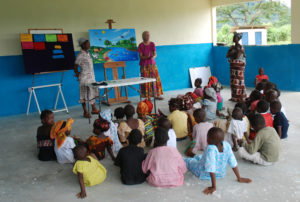 We had been in our home in Baomahun since March of this year and I was finally — finally — holding a children’s bible class.  We timed its launch to coordinate with the beginning of the school year and would follow their calendar.  I would need to utilize their holidays to refresh as well as plan and prepare for the next session; I had thousands of felt figures to cut out and my plan was to cut what I needed for each trimester thereby keeping up, I hoped.

All in all, our first class went remarkably well.  We didn’t have benches yet nor screens on the windows but we made the best of it with the kids sitting on the cement floor.  Note to self — make sure to have a pail of water and a cup next time!  It’s all a learning curve in a new culture and with no indoor plumbing, drinking water must be hauled in. 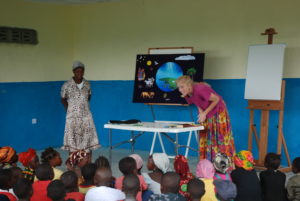 She wasn’t there for several weeks.  I was sure I’d be able to pick her out from the growing group.  Each week I looked and each time I was disappointed to not see her again.  A couple of times I had caught a glimpse of her while I was in town at the market; she returning the distant gaze before shyly turning away.

Then one day, while I as walking home from market, I was startled by a little voice from behind.  “Opotu, I de brook.”  Translation  – “White man, I’m going to do laundry.”  I turned and there she was, smiling and repeating the village Krio phrase while a mountainous plastic basin of soiled clothing balanced perfectly on her small head.  And she was smiling!  It was a wan, somewhat timid smile, but a smile nonetheless.  I forget how I answered her but if my Krio was off, she certainly couldn’t have mistaken my smile.  She averted her eyes and walked past me in the direction of the village laundromat — the river.

The following Sunday, there she was, a little dusty around the edges but in class.  I made sure she saw me smile.

After class, as the kids were milling about thinking about leaving, I turned my back to the group and quietly asked my faithful assistant, Elisabeth, “Who is that girl, the one with no head wrap and wearing (whatever she had on that day)?”  Elisabeth brightened, “That is Margaret.  She is my niece, I brought her!”

“She looks so frightened,” I commented without turning to look at her.  I didn’t want her to feel embarrassed and not return.

“Yes Mummy, she is.  She’s an orphan and has never attended school.  This is quite intimidating for her but
she came because I asked her to.”

In Sierra Leone, orphans are socially shunned.  They are often blamed for the death of their parents as an act of witchcraft though no one can ever explain what benefit there would be to a child, or for that matter an infant, perpetrating such a “crime”.  If they are “adopted” into a family member’s home they are the bottom of everything wearing cast-off clothing, doing the drudge work (such as mountains of laundry heaped on a small 10-year-old), eating scraps of food left after everyone else has eaten, and no family would waste money on school for an orphan, especially an orphan girl.  They are belittled, berated, and exploited especially in remote village settings where outside influences don’t reach.  I knew little of this when Margaret entered my life. 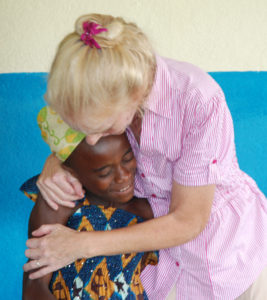 All the children received hugs for memorizing scripture but I confess that I hugged Margaret (pictured) a little tighter and a little longer for her courage in reciting Genesis 1:1 before the entire class.

Margaret stuck it out at our Little Fragments Bible Class for a few months, long enough to learn Genesis 1:1 as we had fun studying creation on the felt board.  After that her attendance was mostly sporadic but my heart of love for her has never changed, even still.

Over the years of our somewhat turbulent relationship, Margaret managed to teach me more about myself and my relationship to the Lord than she can ever understand.  I am indebted to her for that and wish that I could tell her “Tanky-ya” — Thank you, in my best village Krio.

Post Script:  From time to time I’ll have posts highlighting the many lessons that Margaret, the orphan, taught me, the teacher.  They’re deeply personal largely because of my love for Margaret but I wish to share them because they’re so instructive.  I always marvel at the ways in which the Lord brings lessons and this has to be one of the most incredible of them all.