The name of the LORD is as strong tower: the righteous runneth into it, and is safe. (Proverbs 18:10)

For thou hast been a shelter for me, and a strong tower from the enemy. (Psalms 61:3) 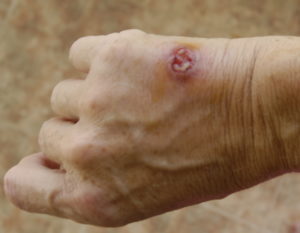 By the time this crater was finished eating my flesh away, it had consumed a large portion of the back of my hand and bled under what skin was left! It took over three months to completely heal.

I had faint hopes that this illness would quickly pass, but alas, it’s clearly not going anywhere soon: another dreadful flesh-rotting sore. I eventually diagnosed them from my tropical medicine books as being tropical ulcers, the awful result of being bitten by an infected sand fly.  Sand flies are tiny creatures, so tiny in fact that standard mosquito netting will not keep them out!  As with the malaria-carrying mosquito, sand flies transmit the tropical ulcer by first biting an infected person, thusly spreading the bacteria to the next person — Me!

Along with the painful, oozing crater spreading across my hand, I have a sore throat, enlarged tonsils and other swollen glands, nausea, and I can barely swallow.  I’ll be sick for several months from this infection but I’m hoping to get rested enough today so I can still have my ladies’ Bible class tomorrow.  I’ll pick up some more antibiotics when I walk into town tomorrow to make a prearranged phone call.

Stephen is away for 5 days so my schedule is my own.  I had big plans and being sick was not on the agenda!  Little did I know, this lonely trial had more in store for me.

My hand is a disgusting mess today. I had thought the cool night air would help so I didn’t bandage the crater.  Bad move!  The oozing puss dried on my pillowcase necessitating me to carefully peel it off.  The more romantic side of foreign missions!

When he left for Freetown several days ago, Stephen directed me to check in with him today from the tele-center.  Gathering my wilting strength, I bandaged my hand, and wrapped it in plenty of gauze to keep the blowing dust out of the draining sore, and to hopefully keep any children from grabbing it!  Thus prepared, off I went to town.  Of course I got many questions about my wrapped hand along the way.  “Spider bite,” was my simple answer, since I did not as yet know what it really was, and that was truly all I could imagine it to be.

First eager stop, the tele-center.  I really just wanted to hear Stephen’s voice.  The phone call, however, yielded some very disheartening news.  Due to an unexpected holiday, Stephen will have to stay in Freetown longer than anticipated as shops and the bank were closed.  But the really bad news came next.  While stuck in traffic in the heart of Freetown, Stephen had inadvertently left the passenger window part way down.  As a very friendly man, actually a decoy, talked to him at the driver’s window, another man reached in the passenger side and stole my two big bundles of mail destined for the post office.  They only contained letters to family and friends, some photo CDs, and a journal for our grand daughter Ruth Anne. Nothing of monetary value, but the thoughts of my heart, which will never be retrieved, are certainly headed for a back alley trash heap as the thieves realize there is nothing of value in the bundles.  I felt so violated as I choked back the tears.

Phone call complete, I continued on with my errands, buying bananas from the lady on the corner, then onions from my usual place.  Lastly, I stopped at the “pharmacy.”  It’s really just a booth with a low counter and an attendant who may or may not be able to read.  Pointing to the box of erythromycin to treat my infection, I simply asked for it; no prescription necessary, for anything.  Fortunately I’m well guided by excellent medical books.  However, most people work on a blend of hearsay, guesswork, and experiences of others, all gladly proffered for their medical advice.  That’s a little frightening to think about.  After visiting with some of my Bible study ladies, encouraging them to come later in the afternoon, I can finally turn for home and my bed.  The late morning sun is intensifying the nausea in my gut, and wooziness in my head.  And, to be honest, my sad heart is still churning over the stolen mail.  But in a few brief moments, the mail will feel like nothing, as the day’s big trial is still looming ahead.

Shortly before turning off the rutted, stone-studded dirt road onto our long driveway, three men sitting in front of a house set well off the road, started calling, “Opotu, opotu!”  The rough translation being, “White man, white man,” but they use it for male or female.  I politely waved while saying good morning, and even managing to give them a wan smile.  But that was not enough as they continued in their taunting game, “Opotu come, come.”   “Not now,” I responded with another wave and kept walking.  I knew what they were up to, and suspected they were under the influence of liquor and/or jamba (marijuana) as their loud comments became shockingly lurid.  Mocking me as I walked past, they began boisterously suggesting all the vile things they’d like to do with me.  I tried my best to just focus ahead and not let my emotions show.  Unfortunately, this is a typical occurrence among the younger men of our rowdy gold mining village, but being ill, I found it more difficult to ignore.  “Lord, why today?” I breathed to myself. 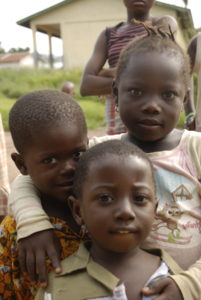 My little friends cheer me. They just love

Ah! Children to my rescue!

Just a few houses up the road, a chattering gaggle of dusty children tumbled out onto the road and began running toward me.  They can always get a smile out of me.  Ignoring the men, I happily greeted the cheerful ragamuffins.  But in my distraction, I tripped, losing my sandal and nearly falling flat.  These fine men thought that was just hilarious and began laughing at my misfortune, mocking still the more.  Determined that they would not see me angry or crying, I made light of my blunder, retrieved my sandal, and walked on with my little escorts.

By the time I passed our classroom, I was on full steam.  Then, just up the hill, it had all spilled over, and I was sobbing so hard that our dogs became alarmed, trotting down our hill to join me as I stomped the rest of the way up.  I got in the house, threw myself across the bed, and just cried, sobbing my lonely eyes out, making so much noise that the dogs timidly came in the bedroom.  Dear friends, they were trying to comfort me in all of my built up frustration, anger, disappointment, and humiliation. 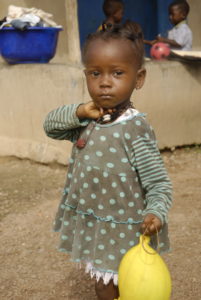 Suddenly, I decided that those men were absolutely NOT going to win!

On went the music and out came the broom; down flowed my tears and up went my prayers.  I vented my frustrations and got some over due cleaning done at the same time!  Despite the intense pain in my hand, the pain in my heart was greater and needed the cathartic effects of housework.

Admittedly, I was angry at the men who stole my mail, but I will never know who they are.  I was way beyond angry at the filthy men of our village who take pleasure in verbally abusing me, but I know from personal experience that they are far worse to my dear African sisters; I can’t give in to a moment of fleshy, verbal vengeance, and risk inciting their retribution when Stephen is away.  I have to just let it all roll off, onto the broad, sturdy shoulders of my Savior.

Stephen will be home tomorrow; I want to cheerfully welcome him!  And the house will be really clean too!