My journal entries are written somewhat in the form of letters.  I like to think of writing to someone who isn’t sitting on the veranda with me.  This helps me to write details and little things which are all too familiar to me but completely foreign to the reader.  Now back in the States, I can read my old journals and be surprised by how much is contained in them.  Details that I know I wouldn’t recall at this removal of time and distance.  Please read this “letter” and marvel with me.  In the weeks prior to this one day, Stephen was away more than he was home.  God placed the earth exactly where it needed to be; the sun, moon, stars, galaxies — all are at His majestic command.  And here in this dusty village, in a half-forgotten corner of the world, He takes notice of little me!  On the very day I had two major problems, Stephen was home.  My times are surely in His hand.  Have confidence in Him my soul!

“This has been an all-out crazy day!” I was writing in my journal as I sat on folding chair in the kitchen under a bare light bulb powered by our solar batteries.  My mind was rushing through all of the little foxes that our day had encountered.  Pesky little creatures nipping at our heels and distracting us from the real business of the day: preparing for a four-day evangelism blitz in Kenema.  Stephen had blown in from Freetown at 8:30 Wednesday night, leaving only this one day to prepare for him to leave early tomorrow morning.  My thoughts from the day continued to pour out on paper . . .

Considering the amount of work we needed to get done, I should have expected that we would also have a continual parade of people coming up with various problems and perceived needs, causing distractions and eating away at our minimal time.  We tried to deal with each in patience.

Due to some early distractions, Stephen missed a window of time for the mechanic at the British mining company to make repairs to the truck.  Fortunately he’s able to do it himself but hadn’t planned on it.  More time gone.

Elisabeth came in the morning begging financial assistance.  Another needing something else.  Stephen walking into town to make an unexpected phone call.  Me stamping boxes of New Testaments to pack.  Someone from church was supposed to do that job but they didn’t show up.  I still had to get Stephen’s clean clothes on the line to dry.

James Lassayo had been up several times, and each time Stephen was truly unavailable.  Early in the afternoon he tried one more time.  Stephen agreed to talk with him while his head was under the hood of the truck as he continued the repair work; this was becoming a piecemeal job stretching through most of the ill-fated day. 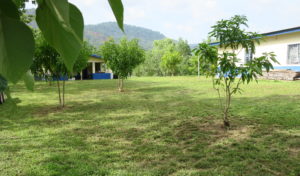 This is our lovely side yard. In the back left of the yard is the generator shed where the wires were about to cause an electrical fire, had Stephen not been home!

Just as James was leaving, I called urgently to Stephen, telling him I perceived a problem with the generator.  It kept losing power, dropping off, coming back up, then dropping off again. His eyes got big and he quickly ran to the generator shed to find the wires “arching and sparking!!”   A few hours later, the repairs were made and we had power again.  The missionary in this field must be able to wear many hats.  Stephen took a brief break for some cold ginger drink.  Looking wistfully at the truck with its hood still open, he lamented, “What a day this has been,” to no one in particular.

As he enjoyed his one respite in the shade of the veranda, a man boldly walked up the driveway.  We allowed the dogs to get our visitor’s attention.  Stephen, not rushing to call the dogs back, went to see what the man wanted.  It turned out he had come specifically to beg for money.  Someone we’ve never seen before, and don’t know through anyone.  He claimed to be a “brother in the Lord” and assumed if he asked “in Jesus’ name,” we would be obligated to help him.  We hear that a lot.  He was very surprised and indignant when Stephen denied him and patiently asked him to leave.

Back to the truck before it got any later.

Day was rapidly slipping into night.  The dark nights come quickly on the equator, and we both needed to have our outside work finished soon.  I still l had to collect Stephen’s dry clothes off the line to pack in his travel bag.

As I was cooking supper, Elisabeth’s daughter was sent up to ask again for financial assistance.  Elisabeth truly has problems, a lot of problems, problems that I wouldn’t want, but I must try to not have her become dependent upon us as the solution to her problems.  However, not wanting the children to be hungry overnight, I relented, sending Gracie home with a large bag of rice balanced on her nine year-old head.

The hood of the truck slammed shut.  A blessed sound to be sure!  Now we can eat supper, then Stephen will drive to the mining company to use their internet to check for an expected email.  He had planned to do this task early this morning while the mechanic repaired the truck. 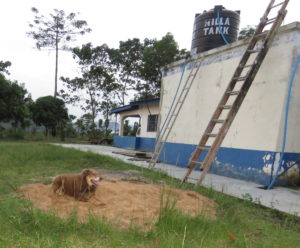 On the top of this utility room perches the water tank. Piping from down the hill carries water up to this tank which is filled twice a day. Gravity then supplies our home.

While tending to my evening chores, I noticed a problem with the well pump.  Thankfully we had electricity from the generator to run the pump, but the tank was just not filling.  I thought maybe it could be an electrical problem with the pump itself, caused by the generator malfunction.  It was 8 o’clock when Stephen returned from the internet and I gave him this bad news.  Now he’s out traipsing around in the dark night trying to find the source of the problem.  Finally he found the problem — there was a fitting that was NOT fitting!  The whole time I was trying to fill the tank, the water had been gushing out on the ground at the well head down at the bottom of the hill.  He managed to rig the pipes back together, and we tried to pump again.  But the tank was still not filling.  Stephen surmised that I had pumped the well dry earlier, an easy thing to do at this time of year, the blistering-hot peak of the dry season.  All we could do was just wait until morning, hoping the well would recover over night and have sufficient water to test the theory.

More traipsing around to pick up his tools and load the truck for the early morning departure.

It’s now 9 o’clock and dark as midnight on this moonless night.  I’m still writing in the dim kitchen, trying to stay awake in case Stephen needs my help.  The sounds of the night are playing in my ears, and across the strings of my heart.

Someone down the hill is wailing the death wail; sadly it’s an all-too-common sound, and sometimes it becomes just another noise.  The Pentecostal church is screaming in tongues and growling over their way-too-loud PA system during yet another raucous “revival” week.  Further on into town, the bar is rocking and rolling.  Sounds of reminder.  Reminder for the reason, the only reason, we are here.   People are dying every day.  People are entangled in the snares of religions of many stripes and colors.  And people are just being people, sinners, lost and going to hell.  Yes, it’s been a stressful day.  But I wouldn’t want to be anywhere else.

We were up early on Friday.  Once the truck was fully packed and ready, we fired up the generator, turned on the pump switch, and . . .  ah, the sweet sound of water gushing into the tank!  I filled it in stages throughout the day so as to not over pump the well again.  Stephen then left with confidence that I would be alright.  I had electricity to run, among other things, the well pump, and I had water coming to the tank!  I bid him goodbye, and watched him drive off in the cool darkness of early morning.  I stood on the brow of our hill, smiling faintly, as I watched his tail lights pass through town.  He was off again to his passion: training churches in proper methods of personal work, evangelism, and public ministry.  Our purpose for being here.