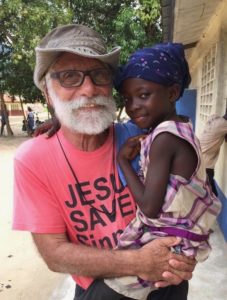 This is one of the dearest photos to me.  There is so much more going on here than meets the eye.  Something very special between these two friends.  Love.

Matah has grown up in The Bible Mission Church.  She was about a year old when the church was started and was even among the first of my “nursery blanket” kids. 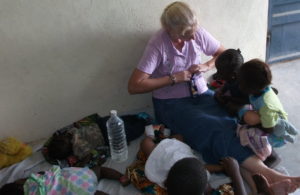 When Matah was about four years old the Ebola crisis hit Sierra Leone.  As a precaution for my poor health, Stephen had me return to the States, while he stayed on to help our church people go through this terrible time.  I had been Stateside about three months, when Stephen called from Lion Heart hospital in Yele.

“For uncertain reasons, Matah Alpha just crumpled and collapsed this morning and did not regain consciousness!  She’s in a coma now, and we need prayer.” Stephen relayed.  The medical officer at our rudimentary bush clinic said she needed to be urgently transported to the hospital and her father, Emmanuel Alpha, asked Stephen to please drive them.  When it’s a dear friend and his small daughter, you don’t think about the risks to yourself, you just act.  So, Stephen settled them all in the back, mother, father, and little Matah. 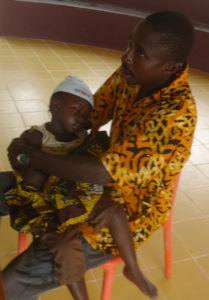 “This is not a good place to be,” he told me in reference to the town of Yele in general and the Lion Heart hospital in particular.   This once vibrant and growing community was in the ravages of Ebola, as well as the agricultural and economic collapse stemming from the far-reaching ripple effects of the virus.  Tonkolini District, where the Dutch charity Lion Heart hospital is located, had been put under quarantine just three days prior because the Ebola Virus Disease (EVD) was spiking so severely.  The hospital’s isolation ward was full with very sick and dying people.  Fortunately Stephen had an Ebola Response Pass and was able to get into the quarantined area to get our little Matah to the best hospital in our area.

Now we waited as Matah and her mother needed to be screened for Ebola before being allowed to enter the hospital.  But time was against this frail, comatose form, draped in her father’s lap, so the staff took her in and began to stabilize Matah with I.V. fluids before the tests came back. Thankfully, she was finally given the all-clear, she did not have the virus.  Now we all could breath a little easier.   For me the sigh of relief was a little bit bigger because now I also knew that Stephen was free from any risk of contracting the disease himself.

Eventually, tests showed that Matah was severely dehydrated and also severely anemic; a deadly duo we’ve seen in children so consistently over our years of ministry in Sierra Leone.  Most children have had malaria so many times that their small systems just stay chronically anemic, a side affect of the mosquito borne blood infection.

Next, obtaining life-giving blood for Matah proved to be the final hurdle.  Neither of her parents were a match.  And despite being one of the best hospitals in the region, Lion Heart does not have blood storage capabilities.  What could be done?  There was no time to make the long drive to the nearest blood bank in Makeni.  She needed blood now! 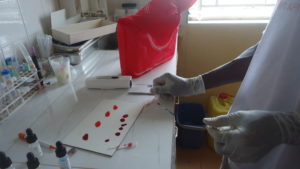 Blood typing and cross matching in the lab

That’s when Stephen quietly stepped up and said that he was O-postitive, the same type as Matah, and would be willing to give a unit for his little friend.  And so it was that, after a sample was typed and cross matched, Stephen watched his blood dripping from the bag, through the long, clear tubing, and into little Matah’s tiny arm.  She was one of the first of many children who have had “Brudda Stevie’s” blood spare their young physical lives.

Now we pray for the day when the pure and sinless blood of Jesus Christ will save their eternal souls. 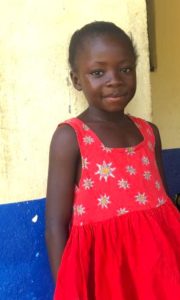