If you have men who will only come if they know there is a good road, I don’t want them.

I want men who will come if there is no road at all.

Adventuring on a road less traveled!

It was winter and had just passed to the new year, 2004.  Stephen was out on a late night walk in the moonlight, the sounds of the wooded path softened by several inches of fresh snow.  Coming to a favorite place, he sat on a log.  He sat to pray, to wrestle with himself and with with Lord.  He tried to peer down the way of time a bit, to perhaps see how his choice would turn out.  Haven’t we all done that at some point while struggling with a major decision?  How will this road end?  Where will it lead me?  Which way should I go?  So many questions, but what he really needed was a clear answer.

The struggle concerned what was probably one of his biggest life decisions.  And as he could see it, neither road was wrong.  Had it been a choice of right and wrong, good or bad, it would have been simple.  But it wasn’t as clear-cut as that.

Should we pack up and move north, taking the great job offer in Portland, Maine, making us eligible for a second retirement in 17 years?  Hadn’t we long talked of moving further north in our beloved native New England?  Was this our opportunity to do so?  This choice would set us up perfectly for the retirement we had often desired.  There was even a good church in the area.

Or should we pack up and move south to DeLand, Florida to attend Bible school at THE Bible Baptist Church?  Hadn’t Stephen long desired to go to Bible school?  What if we were to simply give our retirement years to the Lord to use however He desired?

With some minor editing set apart in brackets, I will let New Hampshire’s poet, Robert Frost tell our story by using portions from “The Road not Taken”

And sorry I could not travel both

And be one traveler, long I stood

And looked down one as far as I could

To where it bent in the undergrowth;

Then took the other, as just as fair,

And having perhaps the better claim,

Because it [surely] wanted wear;

“The better claim,” God’s claim.  That was how Stephen finally decided which road was best for us.  Remember, this was not a choice of right or wrong.  This was Stephen asking God which road, which choice held the better claim on us.  In the end, we both knew which road “wanted wear”, thereby making the decision easy.

I shall be telling this with a sigh

[In Heaven] ages and ages hence:

Two roads diverged in a wood, and I—

I took the one less traveled by, 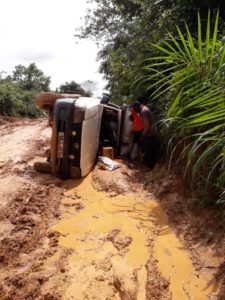 The road didn’t go so well for this driver! This is a very common sight in Sierra Leone.

And that has made all the difference.

In 2004 we moved to Deland Florida.  In giving our retirement to the Lord, we gave Him everything.  This meant leaving behind family just as our first grandchild was born.  Then in 2007 the Lord took us at our word and called us to Sierra Leone, West Africa where we permanently moved in 2009.

Two roads diverged in a snowy wood.  That night Stephen made a choice which forever changed the course of our life.  Yes, we chose the road less traveled by, the road which few might take.   But I’m thankful that we can both confidently say, “That has made all the difference.”

Below is a small sampling of some roads in Sierra Leone, roads on which David Livingstone would happily join us! 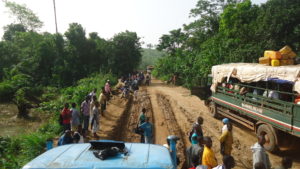 Sometimes the road turns into a mud pit in which transport vehicles and their passengers become stranded. 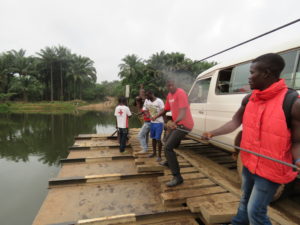 Sometimes the road ends at the water’s edge and the vehicle must be ferried to the other side to continue the journey. 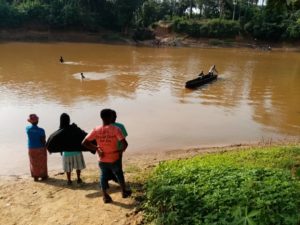 Other times the vehicle is left behind for a canoe!

Post Script:  Part II of this series will highlight some of the places to which this less traveled road has taken us.  Despite hardships and difficulties, we wouldn’t go back and change roads. It’s been an exciting adventure — and that has made all the difference! 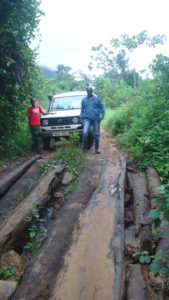 Negotiating a palm-log bridge can be tricky as the logs may not well line up with the vehicle’s tires. It’s always wise to get out and check first!

email
Posted in Letters To My Friends, Poetry