. . . as the bridegroom rejoiceth over the bride, so shall thy God rejoice over thee. (Isaiah 62:5)

July 16, 2021 — The sight of his shoes in the late afternoon sun, sitting next to mine by the door, abruptly caught my attention.  A smile played at the corners of my mouth while a lump rose in my throat.  A few tears slipped out of my eyes unbidden.  He’s coming home.  Again.

The rush of emotion took me by surprise.  As I continued to sweep the entry way, thoughts cascaded in and out of my mind in quick succession.  A parade of departures and home comings spanning our 40 years of marriage.

Career military life is not for everyone.  “For better or worse” is challenging enough when together, but with the constant strain of separation, the struggles multiply exponentially as the one left behind tries to hold together home and family.  Alone.

Many marriages do not survive that strain. 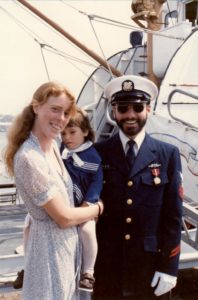 Stephen’s duty assignment after Governor’s Island was the Point Knoll, an 82 foot patrol boat where he did search and rescue as well as drug interdiction. Danielle was three.

Fall 1981 — “Normal is just what you’re used to,” I confidently declared to Stephen, trying to muster my best newly-married, 19 year-old-bravado.  He was apologizing to me — again — that he could not offer me a normal married life.  He had already seen seven years of military life.  He knew much better than I the failed marriages and bitter wives.  He knew the unfaithful husbands and split apart families. I was trying to assure him that I, we, would be OK.  Naive?  Perhaps.  Naive but determined.

Quitting was not an option.

After our September honeymoon in the beautiful White Mountains of New Hampshire, he was off to his new duty station; Governor’s Island, off the tip of Manhattan in New York City.  For the first three  years of our marriage, I would only see him on the weekends.

Summer 1991 — Danielle and I were preparing to move into our new home.  Alone.  She was nine years old.  Of all our military separations, this was the hardest.  On loan from the Coast Guard to the Navy, Stephen was given orders for Guantanamo Bay, Cuba as a ship-board trainer.  The billet was for two years.  He loved the work, and the intense schedule kept him busy training all manner of military ship, large and small, domestic and foreign.  With his time so full, he didn’t feel the strain as much as we did. Oh sure, we got to see Stephen from time to time, and we lived near our families and church friends.  But it was certainly very challenging to raise our headstrong, dyed in the wool, hard-core Daddy’s Girl.  Without Daddy.

We all felt the strain much more than typical.

I well remember one particular time Stephen came home.  He caught a ride on a Navy aircraft back to the States, somewhere.  From there he took a commercial flight to our small local airport.  He had arranged for our pastor to pick him up and bring him to the apartment where Danielle and I were living as we waited for the new house to be built.  He had furtively snuck home without our knowing.

He completely surprised us!

At about five, Danielle is posing next to one of the many countdowns we kept the times Daddy was away.

Early spring 1992 — I was in the master bathroom of our spacious new house brushing my teeth, when I caught a glimpse of my hair in the mirror.  Well, that simply would not do.  What if my love were to surprise me again and suddenly just show up?  Today!  I went about to arrange my hair more pleasingly. Maybe a pair of earrings too.  Yes, Stephen likes it when I wear earrings.  I really should have on a better skirt, not this old stained one I use for garden work.  I chided myself for putting it on in the first place. “What if he were to surprise me again?” I announced out loud to no one but me.  “Maybe even today!”  It only took that one surprise visit to illicit from me such compulsive behavior.  I wanted to be sure that I was fully ready for the next time he might unexpectedly just drop in.

But then it clicked!

I suddenly realized that my primping and preening for the possible surprise arrival of my dearest earthly love was a perfect and beautiful picture of the promised, sure return of our Lord Jesus.  At an hour we know not!

Be ready: for in such an hour as ye think not, the Son of man cometh.

The glimpse of his shoes.  That’s all it took.  All these memories and more, came rushing back into my mind and heart by the simple sight of his shoes next to mine.  Putting my broom away I pondered the thought . . .

Am I prepared for my beloved bridegroom?

Lord, let me not get so used to the waiting that I neglect the preparing.

I will greatly rejoice in the Lord, my soul shall be joyful in my God; for he hath clothed me with the garments of salvation, he hath covered me with the robe of righteousness, as a bridegroom decketh himself with ornaments, and as a bride adorneth herself with her jewels. (Isaiah 61:10) 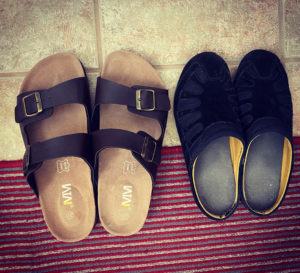 The view that caught me off guard and prompted this post.

The scene of me brushing my teeth, and my preparing for the possibility of another secret return by Stephen truly happened just as written.  I laugh at myself now, but the hopefulness was incredibly intense, I wanted to be ready!  I remember it so clearly, and still chuckle as I see my younger self fussing over something for which I had no promise.  Stephen never did give us another surprise homecoming.  But I continued to regularly prepare for that possibility thinking to myself, What if it were today?  And I never lost the vividness of that sweet lesson, still so dear to my heart today these many years later.