Sometimes my life in West Africa resembles scenes from a low-budget science fiction film.  You know the type I mean — where the special effects are so poorly done that they engender bourgeoning laughter rather than fright. But the old adage that “truth is stranger than fiction” is an accurate assessment of the low-budget scenes through which my days regularly pass, and I try to laugh rather than run screaming off the set.

Many times a science fiction film will start in a quaint, pastoral setting, calmly drawing the viewer in with its hushed serenity, so that you don’t even notice the near-apocalyptic doom which is happening right in front of you.  Such is the opening scene from this science fiction cataclysm.

After enjoying a quiet evening together in the garden, and watching a lovely West African sunset, Stephen and I turned to some few remaining outside tasks before darkness completely settled in around us.  I casually cautioned him about a trail of driver ants, barely visible in the semidarkness, near the generator as he was headed that way for the evening refueling.  The marching columns of driver ants are a common occurrence during the rainy season, and we have learned to avoid their fierce cavalcades.  However, after refueling, as Stephen rounded the far corner of the house, he came upon a scene of terror which was about to shatter our otherwise tranquil evening: Ant Invasion!

The northeast wall of our house was literally covered and crawling with ants — painful, biting, tormenting, huge driver ants! 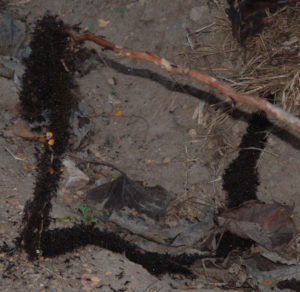 Sorry, but I can never resist to “play” with the covering of soldier ants as they cling together even when lifted.

Stephen yelled for me to quickly run inside and close the windows but alas, it was too late.  While we were lazily enjoying the beautiful sunset, the ants were enjoying free access to a warm, dry, apparently unoccupied home.  Ants were everywhere, streaming in through the corners of the ill-fitting windows.  Even closing the windows was little defense against their bold incursion.  There was no time to delay.  Our divide and conquer strategy had to be swift.

Inside, I grabbed a can of high-octane pesticide spray (the kind that could never be sold in the States), while Stephen’s weapon of choice outside was the hose.  Fighting their way through his deluge, the ants mercilessly attacked Stephen’s feet, whereupon he withdrew to reposition himself standing on the high ground of the bumper on our truck.  Ants then audaciously marched up the hose, fearlessly making their way to his arms and digging in with their over-sized pincers!

My results inside were instantaneous and decisive as the ants were no match for my chemical warfare.  I dispatched a full can in and around the stacked storage bins, probably scarring my lungs for life, but leaving piles of ant bodies on the tile-floor battlefield.

I cautiously exited the backdoor where Stephen was still in the throes of hand-to-pincer combat, his hose beginning to give him the winning edge against our small but mighty foe.  I then deployed a fresh can of poison outside at the base of the house, on the ground, and around both corners just to be extra certain that the conquest was ours and the enemy had indeed been subdued.

The clouds parted, the evening birds began to sing again, and the sunset glowed a little more golden as we walked triumphantly hand in hand into the house we just battled to reclaim from … The Ants.

While this is a comical look at our driver ant invasion, these little critters are indeed a mighty enemy, not to be taken lightly.  Their massive colonies can contain over 20 million individual ants.  As they march, the soldier, or sentry ants form a protective channel, lacing themselves together creating an impenetrable  covering over the top of the smaller, egg-transporting and worker ants. They are very dangerous to animals, and our dogs quickly learned to avoid their painful bites.  We have even heard stories from the village locals of the dangerous ants killing such animals as vulnerable young antelope or wild boars, stripping them of their flesh in no time.  A couple of times I have unwittingly stepped into their driving columns which were hidden under thick grass.  They then quickly covered my foot, moving upward onto my body, viewing me as an enemy that must be attacked and subdued.  At which time I ran for the shower as it was the only way I ever found to get them off.  It’s a powerful ant that can draw blood!  I am allergic to the sting of the fire ants in Florida but I’ll take those swelling stings over a leg covered by driver ants. 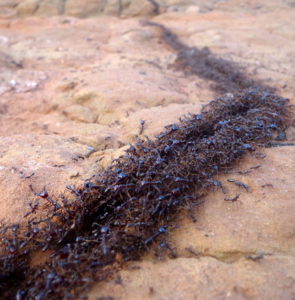