Lessons from a Broom

Prologue: These journal entries are among the first in which the Lord began to use my struggles with cultural adjustments to show me spiritual insights.  We had only been in Sierra Leone for a few months and were still renting a house on the outskirts of the capital city of Freetown.  I so enjoyed the upper veranda built on the roof of that house.  What a vantage point!  There, with a cup of tea, my Bible, and a journal, I would unobtrusively enter into the daily lives of the people without their knowing.  As I sat inconspicuously behind the baluster railing, they simply carried on with their daily tasks quite unaware that they’re providing valuable understanding for the new white girl in the neighborhood! 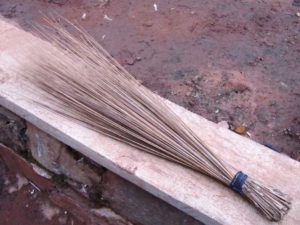 Along with the crowing roosters, the kindling of fires, pot lids clanking, and families stirring, one of the first sounds of the morning, well before it is light, is the rhythmic whoosh-whoosh-whoosh of young women sweeping.  The “living rooms” of West Africa are outside of the homes, under the shade of trees where it is cooler and more comfortable during the heat of the day and where the light breeze dispels mosquitos long into the night hours.  The women of Sierra Leone care for these outdoor areas with the same attention a Westerner gives her indoor carpet or tile.

Stooped over, using locally made grass brooms with no handle, the women sweep away leaves, trash, debris, and even the clay soil dust which has blown in on the night winds.

But from my high vantage point of the roof, I have noticed some interesting habits which have spiritual applications; habits these ladies have probably not considered because they’re so accustomed to them. 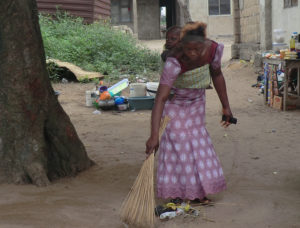 Psalm 19:12 Who can understand his errors? cleanse thou me from secret faults.

I have found it curious that the women and their brooms have predetermined boundaries; they sweep just so far and that is all.  In my morning musings, this has become a picture of religion.  Many of them mark the boundary by leaving the debris they’ve just swept out of their living space in a very neat line.  On occasion this line of rubbish is burned leaving its ash as a marker of sorts.  Others collect the waste in a basket and remove it to another area of the yard, usually behind their own home but in front someone else’s.  Here, out of sight and mind, it just becomes part of the landscape, a testament to the incompleteness of their efforts.  I have even watched as some will sweep their refuse across the street into the road-side ditch in front of her neighbor’s yard!

By their own reasoning they have decided what is an acceptable measure of cleanliness.  By self defined standards, they decide what becomes of the refuse of their lives.  They imagine that they have bettered themselves while not considering that the trash of life may blow back into the yard or thinking of how it may affect someone else.  I have seen these end-results from my birds-eye view.

And God sees my feeble attempts from his grand, all-encompassing vantage point.  He sees when I sweep things under my rug or when I give an incomplete effort or when my actions influence another.  What is my “acceptable measure of cleanliness” — spiritual cleanliness?  What spiritual shortcuts have I developed that I no longer see due to their very familiarity?

I John 1:9 If we confess our sins, he is faithful and just to forgive us our sins, and to cleanse us from all unrighteousness.

Rising before the sun has blessings which otherwise would be missed.  Not to imply that this happens every day but I sure do enjoy when it does.  The cool, quiet mornings usually bring some spiritual instruction; always that time yields a nearness to the Lord which no other holds.

Watching the neighborhood women sweep their yards in the dusky darkness of the pre-dawn, I am instructed by their diligence.  They are concerned enough about the appearance of their main living space to rise early and sweep it thoroughly.

I have watched women sweeping, bent over, low and humble, using a flash light to carefully examine their

work.  They want to be certain it’s properly and completely  cleaned.  Oh, how that bright light stands out against the darkness to reveal even small impurities!  My meditations have revealed this as a representation of relationship.

Do I approach my spiritual cleansing with such diligence?  I should.  I am invited by the King of Glory, the God of creation, to come to him — HIM — for cleansing.  An incredible thought that he should desire me to be so near to him.  This is not only for salvation, the starting of our relationship, but for continually keeping a right relationship with my heavenly Father.

How I am helped by this simple example from daily life in a foreign culture.

*I did not take these photos

email
Posted in Meditations from the Morning Watch