Shortly before my departure from Sierra Leone in June of 2017, Stephen and I took a couple of days for a sort of mini vacation in the capitol city, Freetown.  He had other business there and I decided to tag along and rope him into some time at the beach in an attempt to relax a bit.  We both love the ocean.  Two of the mornings we were wandering around the beachfront, we were able watch haulbacks with men using dragnets and, when spiritually applied, they yielded some great lessons! 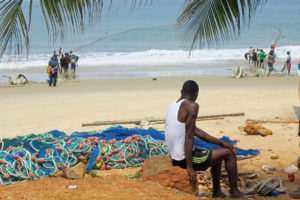 Mark 1:17 And Jesus said unto them, Come ye after me, and I will make you to become fishers of men. 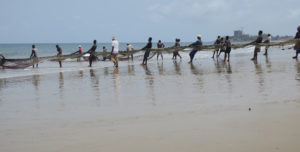 To be done properly and efficiently, those operating the haulback need to function together or everyone loses.  The men handling these nets were like a well oiled machine.  Their cadence was impressive as they chanted their rhythm and all 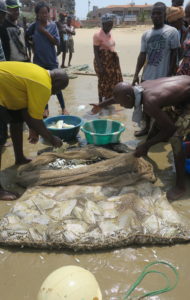 pulled back at precisely the same time, digging their heels into the wet sand and leaning with their full weight.  Not just tugging with their arms but heaving with their whole body.  As one body but many members.  This crew brought in a good haul and were paid well for their labor. 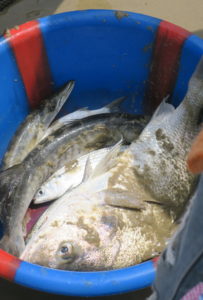 The second day we watched a different group and their haulback.  And they were just that — a group, not a team.  Their first mistake was that they had set up in a really poor location and didn’t have room to maneuver well, 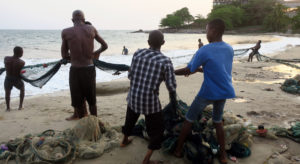 getting jammed in amongst the rocks, the sea wall, and even their own nets.  They didn’t have a good plan of attack, no one calling cadence, and obviously little experience.  Stephen even personally knew one of the men in the operation and said that he knew he wasn’t a fisherman!  We later learned that the short-handed crew had just rounded up a few extra hands and those hands were completely without skill or experience.  With so few hands and so little skill, their haulback was a disappointing failure: nothing but an old cast off tire that somehow ended up in the bay!  There would be no pay for this crew. 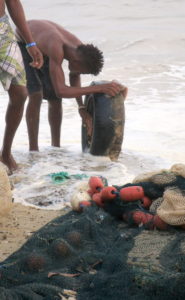 Lesson 3 — Fish where you can 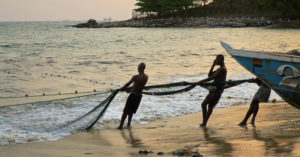 Let’s learn from someone else’s mistake.  A good take-away  from this second crew is that they were using the wrong technique for the more closed in area they were trying to work.  We can give them credit for trying a different, less fished area but had they used cast nets rather than a dragnet they likely would have had better success.  The lesson for us in this is simple: fish where you are!  But using the right technique will be more rewarding.  It’s not a one-size-fits-all world out there and sometimes to be a successful fisher of men, one must change the technique or style or presentation.  Is it just not working?  Shift gears, regroup, and go at it a different way. 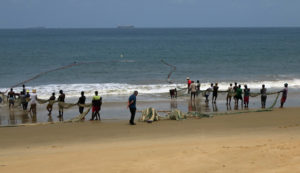 There’s one person on the scene of the first crew who is easy to overlook: the buyer.   The man in the center on the shore is a Chinese man waiting to purchase the fresh haul of fish.  He actually ended up purchasing the entire catch. In John 21:5 Jesus said to the disciples “Children, have ye any meat?”  Calling from shore and as yet unknown to the disciples, Jesus was playing the part of the purchaser asking if their haulback had been successful; had they had taken anything he could buy.  In effect he was calling them to give an account of their labor. 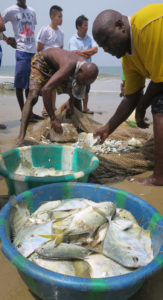 On the dawning of that glorious new day, when Jesus calls me from the far shores of heaven, I can imagine him saying, “Laura, child, have ye any meat?  What have you done for me?  Are you coming to shore empty handed?”

I must work the works of him that sent me, while it is day: the night cometh, when no man can work.  John 9:4

Post Script: Having served 20 years in the United States Coast Guard, Stephen has a lot of experience with the commercial fishing fleet of the east coast from conducting boarding inspections.  It was with much interest that he watched this same trade being implemented manually.  It’s from discussion with him about the technicalities of a haulback that these lessons were formulated and developed.  They’ve been greatly abbreviated here to keep them concise.  I hope you enjoyed fishing with us on Lumley Beach! 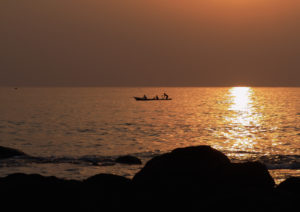 Fishermen on John Obay Beach setting their nets in the fading sun at the end of the day Work for the night is coming!