The sun was getting low as I sat back on the warm earth, stopping my garden work and listening to the evening birds.   And thinking about Margaret.  “Waif,” I thought to myself.  “I wonder if it truly means what I’ve always assumed it to mean.”  I am a word-curious person and soon enough, that thought was plaguing me.  I just had to go look in our several dictionaries!

In my introductory post about Margaret (here), I mentioned that she has taught me many things.  The first of many lessons to come from my little orphan friend was the definition of this word.

Waif — The most common usage, the one with which most of us are familiar, designates a homeless, forsaken, or orphaned child, or someone whose appearance may be evocative of such.

So, yes, technically I was correct in my comprehension of the word.  However, as I kept digging, I found that my understanding was limited (see note *).  The broader definition yielding a pleasant, and interesting surprise.

Waif — Goods found by chance, of which the owner is not known.  The word originally applied to goods which a thief, when pursued, threw away to prevent being apprehended.  Upon being found, the goods then became the property of the king by royal prerogative. 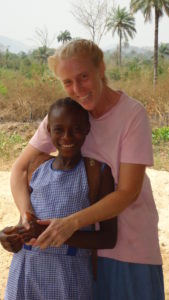 In this photo, Margaret is about 2 years older than she was at the time of this journal entry.

I realized that I had no claim on Margaret.  I had only found her by chance.  But I know the King! I could make intercession on her behalf that, one day, I might introduce her to the One who, by royal decree, had a claim to her.

“Oh Father, if I love Margaret so much, how dear must this little waif be to You.  I know she’s in Your care, she’s property of the King, who desires a relationship with her,” I prayed as I watched the sun sink behind the Kangari Hills.  “Help me to show her, so she can truly understand, how much You love her.  Please help me to bring Margaret to You, the King of kings.”

*Note: These definitions are taken from several sources and condensed for sake of clarity but are true to the spirit of the word in each sense given.

email
Posted in My Fair Margaret